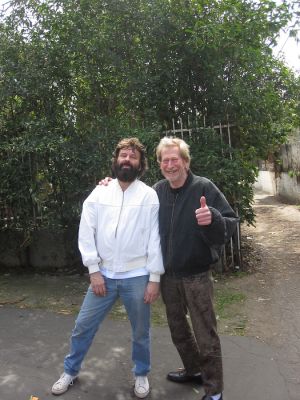 Time distorts in strange ways on the road. Sometimes on a two month tour the first shows soon seem like years ago, I suppose so much happens every day that the mind plays tricks on you. Yet when it's over it seems like a flash in the pan. I find it hard to believe that it's been only a week in LA now and the rehearsals in Oakland seem like some memory from another life.

Still the outside world pokes a face in through the computer screen; the goldfish pond needs water, we need to re-crop photos for my cookbook etc. Meanwhile, in a similar fashion, Jürgen watches Depeche Mode denied the number one spot in the German DAC charts which is occupied by his new single for a fourth week.

Yesterday was quite chaotic. The dancers dropped by to talk about the stage show, then several of Cleopatra's staff arrived, the documentary cameraman and the videographer for the single all cramming into the control room. Through the chaos we managed to get more backing tracks finished and now there are only two more to go.

We decided to start later on Monday, giving everyone a chance to deal with life. We began at 1:00 pm working on a backing piece by Jürgen, which required Jason to play a tribal beat with mallets. The day progressed sluggishly until the evening when things came alive with Nik's flute solo and vocal on the song Galaxy Rise. We now only have a short insert of a song to record as a backing track and we're into vocals.

I'm told that it’s been said that ‘Nicky hates punk’. Not true! Punk was an explosion that changed my life. I'm bringing this up now, because it may seem strange that I am suddenly playing Spacerock and Prog. Aside from the fact that people who know me can attest that it isn't at all sudden, I can explain. We are all building our style from the debris of our influences. During rehearsals I noticed that the rhythm guitar style on the old Hawkwind songs, maybe Dave Brock's playing, was very familiar. If you listen to my rhythm on, for instance, Emotional Blackmail you'll get the idea.

I still love early punk. For example, tracks like Just Another Teenage Rebel by the Outcasts were poignant rather than macho. The first Clash album is rousing. Then the arms race of the second wave took hold and I started to lose interest. I have some blame in that as I was pulling in that direction as early as mid 77 with songs like Telephone Numbers or World War. However, my influence was more those tiny pop songs of Wire's first album rather than any bludgeoning that was to come. In fact, as the faster, harder, louder movement - partly initiated by me - became the norm, it prompted me to about-face and write those slow pieces on Endangered Species. I guess the rebel salute of slinging V's turned into an IQ indicator. 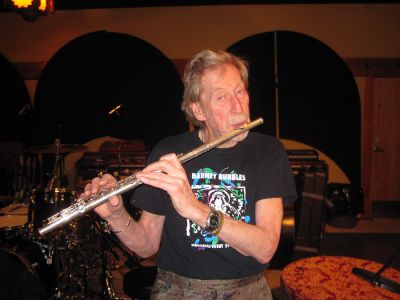 Today's session saw the end of the backing tracks, which for the most part seem to constitute an album although a couple of tracks are outliners. The documentary film guy was shooting again and he is very good at not contaminating procedures so after a while you forget there's a camera rolling. Later we all sat down at the vegan eatery on sunset for a break. The food and company was good, but frankly I'd rather be working as the schedule is starting to get tight.

We ended at 11:00. Jürgen is a big fan of pinball, and the music complex is equipped with an arcade packed with vintage machines.
So he unwound a little there while Nik played a flute solo on a Hedersleben track called End Of Love. In 12 minutes flat he'd recorded two beautiful takes.