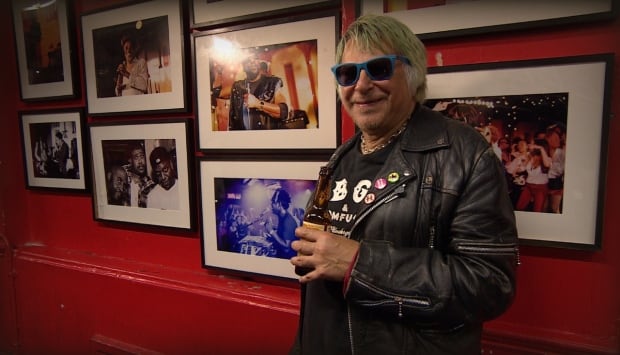 A brief chat with Charlie has featured in an article from Canada's national broadcaster published today.

The article, by Margaret Evans is in the 'Arts & Entertainment' section and is entitled: 'British punk music, once vilified, now celebrated'

Under the heading 'Punk Soldiers', the article inevitably mentions the Subs will be touring Canada later this year...

T&M have also archived the text below:

Four decades after punk arrived in the U.K. like a meteorite, laying waste to the progressive rock scene that preceded it, British punk is being celebrated by the very establishment that once vilified it.

Venerable institutions including the British Library and the London Museum are putting on exhibitions and learned discussions. There are punk heritage walks and fashion shows and live gigs planned over the summer.

For some, it's an exercise in nostalgia. For others, it's a chance to revisit a genre they say is alive and well. But purists say the celebrations are an exercise in tourism and consumerism, perverting the original intent of a movement that provided a platform for Britain's disaffected youth in the 1970s.

We canvassed punk insiders and experts for their views.

Punk without a blueprint

Bass player Glen Matlock left the Sex Pistols before the band released its only album, but he co-wrote many of the songs on it.

"What kinda went wrong with punk a little bit for me is it became this kind of blueprint and you had to be like that to be a punk band," he says.

Matlock welcomes the current interest in punk but worries "it's a bit people reliving the past. People come to my shows 'cause they want to hear God Save The Queen and I wanna play 'em some new stuff and it's a battle."

But he also says he's very proud of his part in the punk movement. "It was one of the last sort of real telling kind of youth movements that was not manufactured in any way," he says.
Media placeholder

"When punk came through it was that the atmosphere in London was dreadful. There was (sic) strikes everywhere.  There was power cuts. There was the IRA. It was a real era of despondency and the song that became known as God Save the Queen — it was actually originally called No Future.

British Library curator Andy Linehan, who lived through 1970s punk as a teenager in London, says curating the library's Punk London exhibition has been "an exercise in nostalgia and memory."
Andy Linehan


"Initially it was people who were sort of in a minority, they felt that they weren't going to get anywhere, that, you know, the economic and political climate at the time was such that they couldn't see much hope and so they kind of gathered together and were kind of in this raucous, rough, rock 'n' roll, were kind of really celebrating their own community."

Linehan says one of punk's most important legacies is its "do-it-yourself" attitude: "Create your own record label, create your own fanzine, put your own gigs on. I thought that was very, very strong. And I think that's something that's still valid and still people today, even though they don't realize it, somebody putting out 500 copies of their own single on a dance record and putting it out on an independent label, that's the legacy of the punk independent label scene."
Media placeholder

Joe Corré is the son of the British fashion designer Vivienne Westwood and the late Malcolm McLaren, the manager of the Sex Pistols credited with, or accused of, manufacturing the punk phenomenon.

Corré created and then sold a designer underwear line known as Agent Provocateur. He says he's enraged by what he sees as the "consumption" of punk by the establishment and is threatening to burn his memorabilia collection, worth an estimated $9 million Cdn, in an act of defiance.
Glen Matlock

He has piles of it in plastic bags, from a pair of Johnny Rotten's pants to some of the most famous and deliberately provocative T-shirts of the era.

"I thought, what the hell is going on here? Anarchy in the U.K. supported by the mayor of London? You can't suddenly have it consumed by the establishment … so f--k it! Let's burn it. You know, we'll burn it and let's see what everyone's got to say about that."

Corré was just a boy when his father was managing the Sex Pistols but he remembers being spat at in the face just for hanging out with people who dressed differently.

"I thought Johnny Rotten was amazing when I was a kid," he says, referring to the Pistols' lead singer John Lydon. Lydon has joined those criticizing Corré for wasting money, suggesting that Corré burn his own bra. The entrepreneur calls that statement "ignorant."
Media placeholder

At 72, Charlie Harper must be the oldest punk singer still gigging in Britain. And the lead singer of the U.K. Subs can still pack a room at the famed 100 Club.

Harper, who plans to tour Canada in the fall, says the celebration of Punk London is pretty good advertising. It doesn't bother him that classic punk bands like The Damned are playing the Royal Albert Hall.

"So it's doing well and so this is the year where it steps up a level. You know, it's nice. It's our work so we're loving it."

"We tell the people what is going on even before it's in the papers. I always say if you ignore punk rock, you're kind of ignoring an important part of life."

What's making him angry these days? "I suppose to me the guys who want to leave Europe, the EU," he says of the upcoming British referendum on EU membership. "All the guys, they are kind of idiots."

Carlos Gomez owns Pepi's hair salon in London's Camden Town, which caters to the punk crowd. Gomez is famous not just for his spectacular hairdos, but for his 18-year-old dog Lady, which also sports a mohawk.
Carlos Gomez

Gomez says not as many punks come to the area anymore, suffering from tourist fatigue. "They feel like a monkey in the zoo a little bit," he says. "They're taking pictures all the day long."

Despite the cosmetic nature of his profession, Gomez would like to see more attention paid to the ideas behind the punk movement this year.

"Punk is about politics as well, a way of thinking. They haven't touched on that much. It just focuses it on the music and the looks of the people.  But you know, there was much more to it," he says.